If there’s any show I feel like I need to drink wine with, it’s Game of Thrones. Tyrion Lannister stole my heart when he said “Everything is better with some wine in the belly” in season 1, episode 1. The amount of wine consumed in this show is pretty impressive, and Tyrion takes the cake as biggest wineo, hands down.

While watching this masterful series, I became very curious about what kind of wines the characters were drinking, and wanted to drink along with them. Although I knew the show was fantasy, it amazed me that the Arbor wines and Dornish Sour Reds that are sipped by Daenerys and Cersei were also entirely made up. So that got me thinking…

Wouldn’t it be awesome to bring the wines in the fantasy world of Game of Thrones to life?

And wouldn’t it be even more awesome if you could find the real-world equivalents to the wines of Westeros at Trader Joe’s?

With some help from the brilliant minds at VinePair , Vivino, VineGeek and some of my own creative interpretations, I’m doing just that! Here are my real world wine recommendations to drink Arbor Gold, Arbor Red, Dornish Sour Red, Dornish Strongwine and Sweet Reds from Highgarden like the characters in Game of Thrones, all of which you can get at your local Trader Joe’s.

If you’re planning on hosting a Game of Thrones watch party, impress your guests by serving these Westerosi wine doppelgängers.

The Wines of Game of Thrones: Trader Joe’s Edition This is said to be the finest wine in all of the kingdoms, known for it’s sweetness, fruitiness, oak flavor and rich gold color. This most famous wine from the Arbor region is associated with the ruling upper class, and is considered a luxury. The closest real world equivalent to Arbor Gold is a Californian Chardonnay. A few of the articles I came across also recommended a Sauternes, but TJ’s did not have any available.

Characters who drink this
– Tyrion Lannister
– Queen Cersei
– Sansa Stark
– Jaime Lannister
– Littlefinger
– Arya Stark posing as the late Walder Frey
– Daenerys Stormborn of the House Targaryen, First of Her Name, the Unburnt, Queen of the Andals and the First Men, Khaleesi of the Great Grass Sea, Breaker of Chains, and Mother of Dragons (AKA Dany) Arbor red wines are mentioned less frequently in the series, but we know that it’s said to be dry, and similar to it’s golden cousin, fit for royalty. This is the wine that the wine seller in Vaes Dothrak uses to try to kill Dany in season 1, AND the wine that was poisoned to successfully kill King Joffrey at his wedding to Queen Margaery (RIP).

When Arbor Red is not being used to kill people, I imagine it’s a delectable, bold red wine similar to a California Cabernet Sauvignon. I’m not one to pick a wine bottle by it’s name or label, but this Force of Nature wine with a burning castle on the label was too perfect to pass up, and it did not disappoint. The Dornish Sour Reds hail from Dorne, which is one of the main wine production regions in Westeros. There is really no “sour wine” equivalent, but when a wine has high acidity it can cause a pucker face (like when you taste a lemon), so we’ll go with that. It is also known to be opposite of the sweeter Arbor Gold with much lower sugar content and light body.

This one had the most debate as to what the real-world doppelgänger would be, but I decided on a Chilean Pinot Noir. These wines are grown in a cool climate and have high acidity, tart cherry flavors, light body and are inexpensive. A Pinot Noir from Oregon could also work here. “The taste of it is languorous and heady on the tongue, the color purple so dark it looks almost black in the dim-lit cellar.”

This Dornish sweet wine’s real world equivalent is Port. Port is a fortified wine made from black grapes in Douro Portugal that is sweet and has very high in alcohol content (I’m talking 19-20% high). Highgarden is the capital of the Reach, and has the most fertile land in all of Westeros, perfect for growing strong grapes and making sweet red wines. The wines here are known for being lower quality, fruity, sugary and high in alcohol content. They are also known for their specialty drink hippocras, which is the modern day equivalent to sangria.

Ideally, I would’ve selected a California jug wine, but TJ’s wasn’t having it. Instead I picked this German Sweet Red, which was pleasantly delicious and not overly sweet. It’s the perfect drink to toast to the lives of Margaery Tyrell and Lady Olenna (RIP).

Thanks so much for reading along! If you enjoyed this piece, please share it with your Game of Thrones loving friends.

Which wine will you be trying first? 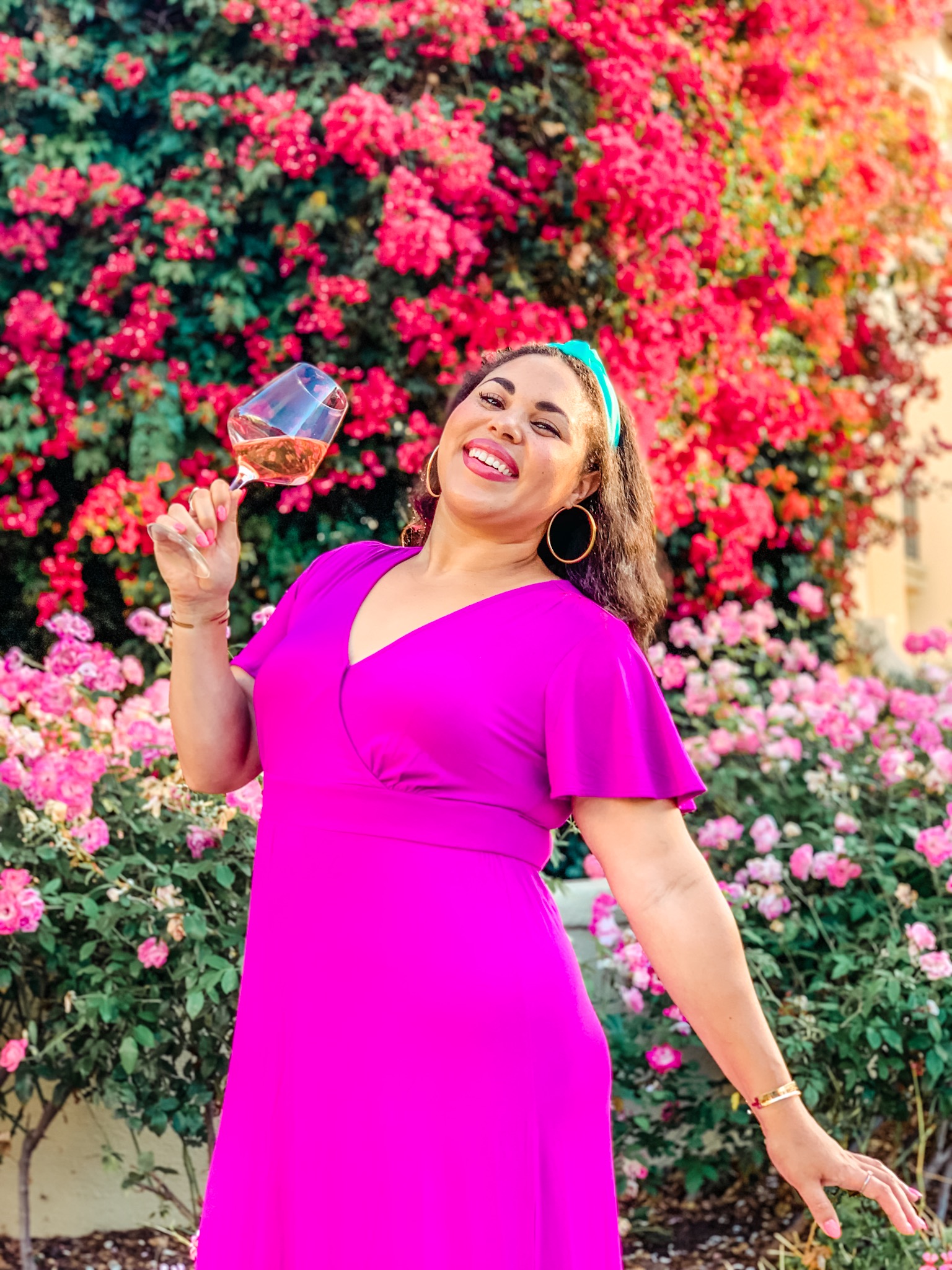 Welcome to Rosé & Chambray where we pair delicious wines with cute outfits in pretty places.

Here, you'll find relatable style, wine, travel and lifestyle inspiration with simple and attainable tips and recommendations to apply to your real life.

Thank you for stopping by and I hope you stay awhile.

Places I love to shop